Today, we’ll be learning how to use AV Foundation, an Apple system framework that exists on macOS and iOS, along with watchOS and tvOS. The goal of this tutorial will be to help you build a fully functional iOS app that’s capable of capturing photos and videos using the device’s cameras. We’ll also be following the principles of good object oriented programming and designing a utility class that can be reused and extended in all your projects.

What is AV Foundation?

So, there you have it. AV Foundation is a framework for capturing, processing, and editing audio and video on Apple devices. In this tutorial, we’ll specifically be using it to capture photos and videos, complete with multiple camera support, front and rear flash, and audio for videos.

Do I need AV Foundation?

Before you embark on this journey, remember that AV Foundation is a complex and intricate tool. In many instances, using Apple’s default APIs such as UIImagePickerController will suffice. Make sure you actually need to use AV Foundation before you begin this tutorial.

Additionally, the capture device is used to actually access the physical audio and video capture devices available on an iOS device. To use AVFoundation, you take capture devices, use them to create capture inputs, provide the session with these inputs, and then save the result in capture outputs. Here’s a diagram that I made that depicts this relation: As always, we want you to explore the framework by getting your hands dirty. You’ll work on an example project, but to let us focus on the discussion of the AVFoundation framework, this tutorial comes with a starter project. Before you move on, download the starter project here and take a quick look.

The example project is rather basic. It contains:

Build and run the project, and you should see something like this: In this tutorial, we’re going to design a class called CameraController, that will be responsible for doing the heavy lifting related to photo and video capture. Our view controller will use CameraController and bind it to our user interface.

To get started, create a new Swift file in your project and call it CameraController.swift. Import AVFoundation and declare an empty class, like this:

To begin, we’re going to implement the photo capture feature with the rear camera. This will be our baseline functionality, and we will add the ability to switch cameras, use the flash, and record videos by adding onto our photo capture functionality. Since configuring and starting a capture session is a relatively intensive procedure, we’re going to decouple it from init and create a function, called prepare, that prepares our capture session for use and calls a completion handler when it’s done. Add a prepare function to your CameraController class:

We’ll use Swift’s nested functions to encapsulate our code in a manageable way. Start by declaring 4 empty functions within prepare and then calling them:

In the above code listing, we’ve created boilerplate functions for performing the 4 key steps in preparing an AVCaptureSession for photo capture. We’ve also set up an asynchronously executing block that calls the four functions, catches any errors if necessary, and then calls the completion handler. All we have left to do is implement the four functions! Let’s start with createCaptureSession.

Before configuring a given AVCaptureSession, we need to create it! Add the following property to your CameraController.swift file:

Next, add the following to the body of your createCaptureSession function that’s nested within prepare:

Now that we’ve created an AVCaptureSession, we need to create the AVCaptureDevice objects to represent the actual iOS device’s cameras. Go ahead and add the following properties to your CameraController class. We’re going to add the frontCamera and rearCamera properties now because we’ll be setting up the basics of multicamera capture, and implementing the ability to change cameras later.

Next, declare an embedded type within CameraController.swift. We’ll be using this embedded type to manage the various errors we might encounter while creating a capture session:

You’ll notice that there are various error types in this enum. Just add them now, we’re going to use them later.

Now it comes to the fun part! Let’s find the cameras available on the device. We can do this with AVCaptureDeviceDiscoverySession. Add the following to configureCaptureDevices:

Here’s what we just did:

Cool! We used AVCaptureDeviceDiscoverySession to find the available cameras on the device and configure them to meet our specifications. Let’s connect them to our capture session.

Now we can create capture device inputs, which take capture devices and connect them to our capture session. Before we do this, add the following properties to CameraController to ensure that we can store our inputs:

Our code won’t compile in this state, because CameraPosition is undefined. Let’s define it. Add this as an embedded type within CameraController:

Great. Now we have all the necessary properties for storing and managing our capture device inputs. Let’s implement configureDeviceInputs:

Here’s what we did:

Up until this point, we’ve added all the necessary inputs to captureSession. Now we just need a way to get the necessary data out of our capture session. Luckily, we have AVCapturePhotoOutput. Add one more property to CameraController:

We’re almost done! Your CameraController.swift file should look something similar to this:

Note: I used extensions to segment the code appropriately. You don’t have to do this, but I think it’s good practice, because it makes your code easier to read and write.

Now that we have the camera device ready, it is time to show what it captures on screen. Add another function to CameraController (outside of prepare), called it displayPreview. It should have the following signature:

Additionally, import UIKit in your CameraController.swift file. We’ll need it to work with UIView.

As its name suggests, this function will be responsible for creating a capture preview and displaying it on the provided view. Let’s add a property to CameraController to support this function:

This property will hold the preview layer that displays the output of captureSession. Let’s implement the method:

This function creates an AVCaptureVideoPreview using captureSession, sets it to have the portrait orientation, and adds it to the provided view.

Then, add a nested function in viewDidLoad():

This function simply prepares our camera controller like we designed it to.

Unfortunately, we still have one more step. This is a security requirement enforced by Apple. You have to provide a reason for users, explaining why your app needs to use the camera. Open Info.plist and insert a row:

This key tells the user why you’re using the camera when it asks for the necessary permissions.

Build and run your project, press accept when the device asks for permission, and HOORAY! You should have a working capture preview. If not, recheck your code and leave a comment if you need help. Now that we have a working preview, let’s add some more functionality to it. Most camera apps allow their users to switch cameras and enable or disable the flash. Let’s make ours do that as well. After we do this, we’ll add the ability to capture images and save them to the camera roll.

To start, we’re going to enable the ability to toggle the flash. Add this property to CameraController:

Now, head over to ViewController. Add an @IBAction func to toggle the flash:

For now, this is all we have to do. Our CameraController class will handle the flash when we capture an image. Let’s move on to switching cameras.

When we switch cameras, we’ll either be switching to the front camera or to the rear camera. So, let’s declare 2 nested functions within switchCameras:

Now, add the following to switchCameras():

Here’s what we just did:

Great! All we have to do now is implement switchToFrontCamera and switchToRearCamera:

Both functions have extremely similar implementations. They start by getting an array of all the inputs in the capture session and ensuring that it’s possible to switch to the request camera. Next, they create the necessary input device, remove the old one, and add the new one. Finally, they set currentCameraPosition so that the CameraController class is aware of the changes. Easy! Go back to ViewController.swift so that we can add a function to switch cameras:

Great! Open up your storyboard, connect the necessary outlets, and build and run the app. You should be able to freely switch cameras. Now we get to implement the most important feature: image capture!

Now we can implement the feature we’ve been waiting for this whole time: image capture. Before we get into it, let’s have a quick recap of everything we’ve done so far:

All we have left to do is actually capture the images!

Open up CameraController.swift and let’s get to work. Add a captureImage function with this signature:

This function, as its name suggests, will capture an image for us using the camera controller we’ve built. Let’s implement it:

Great. Now the compiler is raising one more issue:

Now, head back to ViewController one more time. First, import the Photos framework since we will use the built-in APIs to save the photo.

And then insert the following function:

We simply call the captureImage method of the camera controller to take photo, and then use the PHPhotoLibary class to save the image to the built-in photo library.

Lastly, connect the @IBAction func to the capture button in the Storyboard, and head over to Info.plist to insert a row:

This is a privacy requirement introduced in iOS 10. You have to specify the reason why your app needs to access the photo library.

Now build and run the app to capture a photo! After that, open your photo library. You should see the photo you just captured. Congrats, you now know how to use AV Foundation in your apps! Good luck, and stay tuned for the second part of this tutorial, where we’ll learn how to capture videos.

For the complete project, you can download it from GitHub. 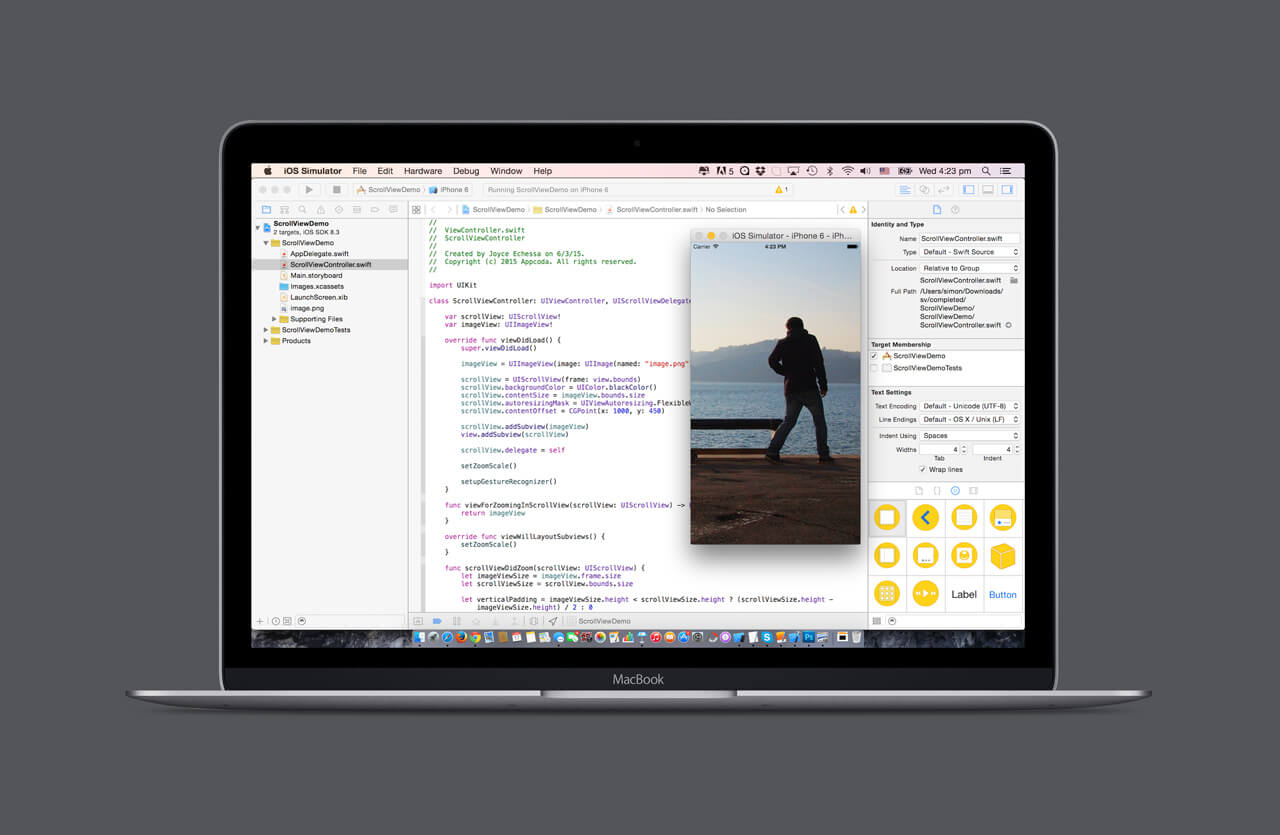 A Beginner’s Guide to UIScrollView