There are several underused and not-so-popular frameworks hidden in the iOS SDK. Some of them can be useful and time-saving tools. The Natural Language Processing Class is one of them. Available in both Swift and Obj-C, the NSLinguisticTagger Class is used analyze natural language text to tag part of speech and lexical class, identify names, perform lemmatization, and determine the language and script. As a result, it is used extensively in machine learning programs. What does this really mean? Well, that’s what you’ll find out!

Note: This tutorial is developed in Swift 4 and has been tested on Xcode 9.2.

To begin, let’s go to Xcode and create a new playground. Name the playground whatever you want and set the platform to macOS. Once the playground is created, select everything and delete it. This way you’ll have a clean slate to work on. At the top of the playground, type the code below to import the following library.

To experiment with the new NLP API, let’s choose a big paragraph to mess around with. Here the block of text we’ll have our code analyze.

The very first thing we need to do is create a tagger. In Natural Language Processing, a tagger is basically a piece of software which can read text and “tag” various information to it such as part of speech, recognize names and languages, perform lemmatization, etc. We do this by calling the NSLinguisticTagger class. In the Playground file, insert the following lines of code:

What are these tag schemes? Well, basically tag schemes are the constants used to identify the pieces of information we want from the text. The tag schemes we ask the tagger to look for are the token type, language, lexical class, name type, and lemma. We’ll be using these tag schemes in the rest of the tutorial. Here’s what each one is:

The options portion basically tells the API how to split up the text. We’re asking the analyzer to ignore any punctuation and any whitespace. If there is a named entity, join it together.

With the initial setup, now we are ready to begin writing code using NLP in Swift! Before we continue to add any code, please make sure your code looks something like this.

So now, let’s begin by identifying what language this text is in. Obviously, we know that it’s in English but our computer doesn’t know that. Let’s create a function to determine the language:

This code should be fairly simple to understand but in case you didn’t, don’t worry. I’ll break it down for you. We assign the string a user inputs to the tagger. We define a constant language to be the dominant language of the string the tagger is assigned to and print it.

Note: The dominant language is the most frequently occurring language in the string. If you had a sentence which had a mix of words from English, French, and Spanish, it would choose the most common language.

Now let’s call the function with determineLanguage(for: quote). You should get an output which reads;

The next step in parsing text is tokenization. Tokenization is the process of splitting sentences, paragraphs, or documents into your choice of length. In this scenario, we’ll be splitting the quote above into words. As before, let’s create a function:

Let’s break down the code. Similar to what we’ve done earlier, we set the text a user inputs to be the tagger’s string. Next, we define a constant range to be the range of characters the API should tokenize. After that, we call the tagger.enumerateTags function to tokenize. We set the range, the length to .word, what Linguistic Tag Scheme to choose, and refer to the options constant we made earlier (i.e. what to ignore and what to join).

You should get a long list of all the words looking something like “Here, ‘s, to, the, … , Founder, of, Apple Inc.”

Note: See how Apple Inc. was attached together. This is because the API recognized it’s a named entity and we told it earlier in our options constant to join together names. Pretty cool, right?

Now that we have identified the language and dove in a little deeper by splitting up the quote into words, let’s go even more deeper by transforming the words into their base root. This is called Lemmatization. Take the word run for example. It can be transformed into running, ran, will run, etc. Since there are many forms of a word, Lemmatization breaks down the word into its most basic form.

Let’s implement the following function to lemmatize the words.

This block of code is about 95% similar to our tokenizeText function. Instead of the .tokenType scheme, we use the .lemma scheme. Then, since the raw value of the tag is the lemma of the word, we have the function print to display the lemma for every word. Now invoke the function and take a look:

The list will look pretty similar to the same list you got after tokenizing the quote. But, there are a couple of differences. For example, notice how misfits, rebels, and troublemakers all have been return in their singular form. In the phrase “They are not fond of…”, see how are is returned to the console as be. 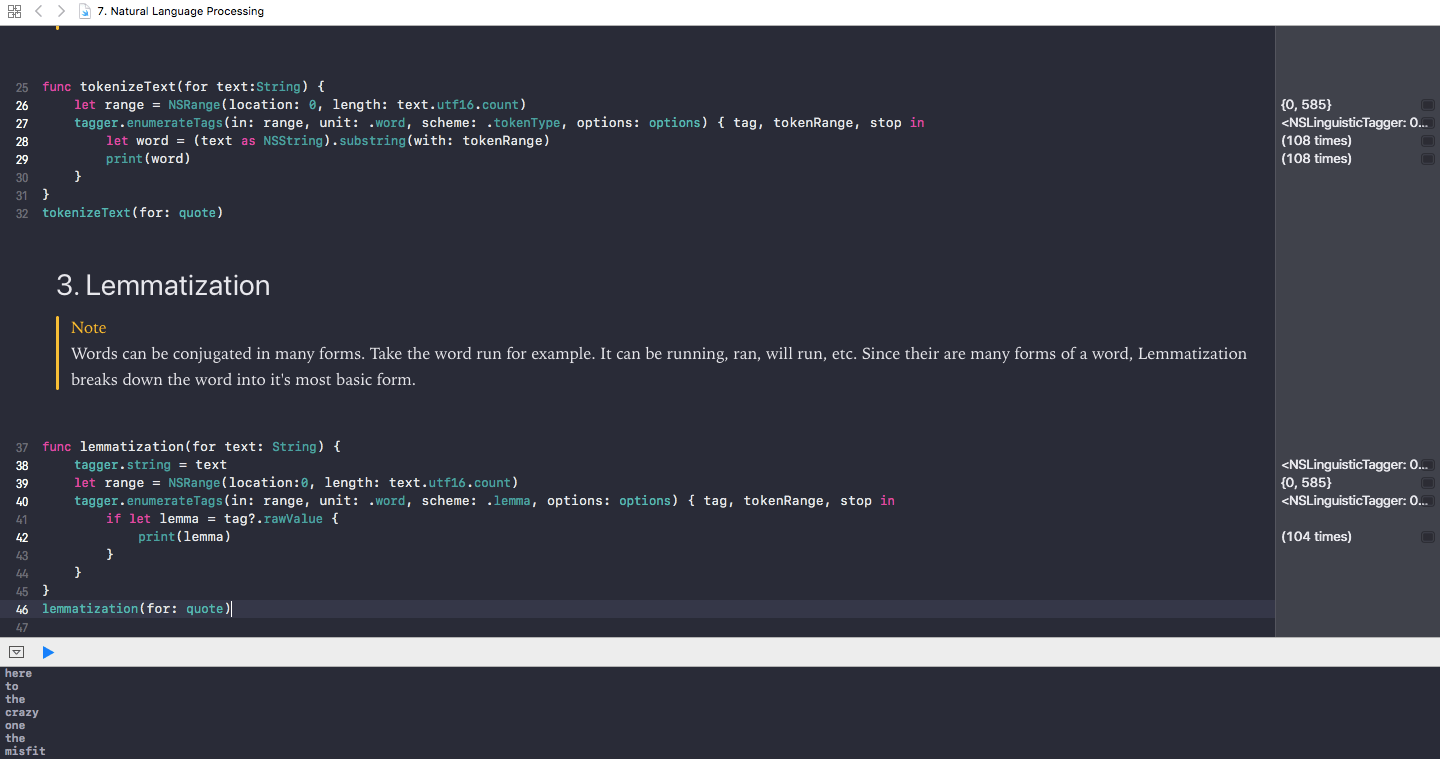 Diving in a little more deeper, let’s take every word in the quote and identify its part of speech.

By now, the code should look really familiar. Same as our tokenizeText function, the only key difference is changing the scheme to .lexicalClass.

The console returns each word and its corresponding part of speech. You can see the verbs, nouns, prepositions, adjectives, etc. Here are some of the results:

Finally, let’s see if the quote can recognize any names, organizations, or places in the quote above. Here’s the function below:

Notice how there’s one extra line of code? These are the tags we want our tagger to be on the lookout for. We want our tagger to list any personal names, place names, or organization names. Of course, change the scheme to .nameType and the rest should be straightforward.

Note: You’re probably wondering why it’s important to search for any named entities in the text. This is because it can lend a lot of insight into the context of the text.

As you probably expected, the function returns Steve Jobs as a Personal Name and Apple Inc. as an Organization Name.

Hopefully by now you know how to use NLP in Swift. However, you’re probably wondering how exactly you can implement these in your apps. One way to implement the NLP API into your app is through the search result. Suppose you had a photos app with captions for each photo. One caption reads “Hike on Mt. Shasta”. Your user probably expect the same photo to show up when he/she search for hike, or hiking, or hikes. This can be implemented through lemmatization and that would definitely improve the user experience of your app.

For reference, you can refer to the complete Xcode playground on GitHub.

To learn more about NLP in Swift, you can check out Apple’s WWDC 2017 video here.

For more details about the NSLinguisticTagger class, you can refer to the official documentation here.

Sai Kambampati is an app developer. He lives in Sacramento, CA and was awarded with Apple's WWDC 2017 Scholarship. Proficient in Swift and Python, it's his dream to develop an AI product with no third-party APIs. When he's not working on his apps, you can find him binge-watching Netflix, at the gym, or at the library. Follow him @Sai_K1065.

New in iOS 12: Adding a Custom UI and Interactivity in Local and Push Notifications 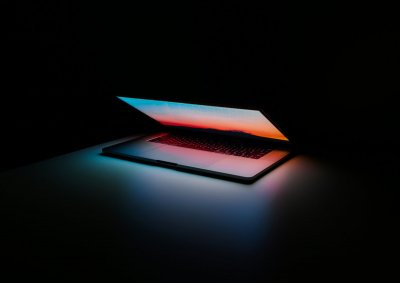